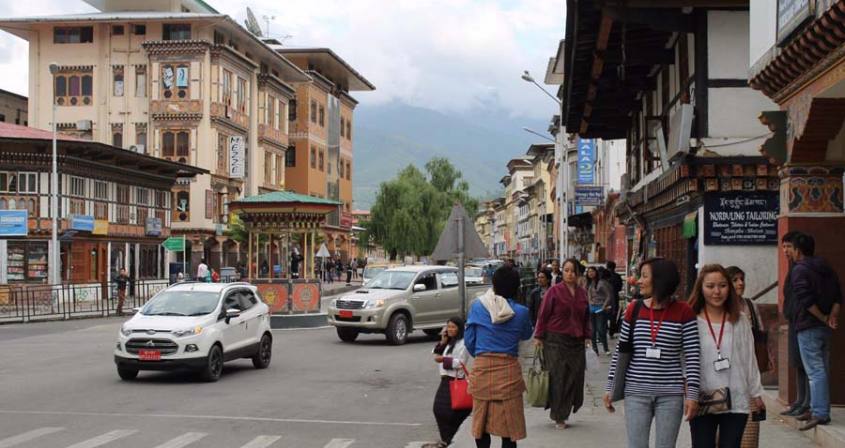 5 Nights 6 Days Bhutan Tour is one of the best way to discover Bhutan in real way within less then one week. Pink Mountain Treks and Expedition, a Leading trip agency would like to offer a most relevant tour and travel package to Bhutan. Those our valuable travelers who are willing to make a tour to Bhutan, travel to Bhutan and trip to Bhutan can enjoy with thickly forested valleys, snow-capped mountains, colorful prayer flags fluttering in the breeze, maroon robed monks and architecture from another age: this is Bhutan, a kingdom that has long maintained its independence and isolation from the outside world and so preserved a fascinating Himalayan culture and tradition.

Day 01:Arrival in Kathmandu International airport and Meet with Pink Mountain Treks and Expedition's representative and then transfer to Hotel.

Day 1Arrival in Kathmandu International airport and Meet with Pink Mountain Treks and Expedition's representative and then transfer to Hotel. Overnight at hotel in Kathmandu.

Day 2Fly to Paro - Thimphu.In clear weather, Druk Air’s flight to Bhutan provides a wonderful view of Himalayan scenery. Whether flying along the Himalayan range from Kathmandu or over the foothills from Kolkata, it is a breathtaking journey, culminating in an exciting descent past forested hills into the kingdom.
On arrival at Paro airport and after completing your Bhutan visa formalities, you will be met by a representative from Pink Mountain Treks and Expedition. Then travel to Thimphu, the modern capital town of Bhutan.
On arrival at Thimphu check into your hotel and after refreshments or lunch visit the following:
• Takin Preserve, which houses the national animal the Takin that is only found in Bhutan. This is an extremely rare member of the goat family. Found in herds in the very high altitudes (13,125ft and over). They live on a diet of grass and bamboo. It can weigh as much as 550 pounds.
• Centenary Farmers’ market (if your tour coincides with Thu-Sun) where farmers would be selling their wide range of farm produces (vegetables from farms and wild ferns or bamboo shoots collected from forest, flour, rice, roasted rice, rice flakes, spices, yams both cultivated and wild ones collected from forests, fruits, etc) and livestock products (mainly cheese and butter). Free interaction with people from town as well as from villages come to this weekend market. Weekend market is from Thursday-Sunday (4 days).
• Tashichhoedzong, a fortress of the glorious religion. It was built in 1641 by Zhabdrung Ngawang Namgyel and was reconstructed into present structure by the late King, His majesty Jigme Dorji Wangchuck in the year 1962-1969. It houses the secretariat building, the throne room and the office of the king, and the central monk body.
• Craft Bazaar -A one stop place to witness Bhutanese culture and buy Bhutan made art and craft product. The Bazaar in its 80 stalls covers all aspects of the traditional arts and crafts of Bhutan. At this Bazaar craftsmen and artisans from across the country display and sell their handicrafts. And also visit other handicraft stores.
In the evening you may visit local handicraft stores.
Overnight at the hotel in Thimphu.

Day 3Thimphu - Punakha & WangduephodrangDistance: 71 km, estimated travel time: 2 1/2 hrs
After breakfast, travel to Punakha through Dochula Pass (3,088m/10,130ft). In the clear spring sky; enjoy the panoramic view of the Himalayan Mountain ranges. Then pass by the beautiful 108 chortens built on a hillock by Her Majesty Ashi Dorji Wangmo (Queen Mother of Bhutan) for the security and well being of His Majesty, the King of Bhutan. You may visit Druk Wangyal Lhakhang .The Druk Wangyal Lhakhang (temple) was built to honor His Majesty the fourth DrukGyalpo, Jigme Singye Wangchuck. The past and future appear to merge in the details of the lhakhang (temple) that tells the story of a supreme warrior figure whose vision pierces the distant future.
Take a light refreshment at Dochula Resort and then drive onto Wangdue and on the way visit the Divine Madman’s Monastery-Chhimi Lhakhang, famously known for its fertility shrine, where one can receive a special fertility blessing.
After lunch visit the Punakha Dzong , located on the island of the Pho Chu (male river) and the Mo chu (female river). The dzong was built in 1637 by Zhabdrung Ngawang Namgyal to serve as the religious and administrative seat of the region. It was here that the dual system of government was introduced in the 17th century and in 1907, enthroned the first King Gongsar Ugyen Wangchuck. Damaged over the centuries by four catastrophic fires and an earthquake, the dzong has been fully restored in the recent years by the 4th King Jigme Singye Wangchuck. At the dzong you can see the highest standards in woodwork. Also visit the massive Kuenray, the Coronation Hall of all Bhutanese kings, the Dzongchung at the entrance to the dzong and the cantilever bridge over the Mochu that has been recently renovated.
In the evening visit local markets in Punakha .
Overnight at hotel in Wangdue/Punakha.

Day 4Punakha / Wangduephodrang -ParoDistance: 125 km, estimated travel time: 3 1/2 hrs
After breakfast travel to Paro via Dochula pass and southern part of Thimphu. On arrival at Paro, check into your hotel in Paro and after lunch visit the following:
• National Museum, housed in the Ta Dzong (watchtower). Here an intriguing collection of artifacts provide a wonderful introduction to the rich culture and heritage of the Kingdom.
• Paro Dzong, a fine example of Bhutanese historic architecture. It is also known as the Rinpung Dzong which means a “fortress that sits on a heap of jewels”. This imposing dzong located above the Paro River is a fine example of Bhutanese architecture with its inward sloping walls that rise to an impressive height. The dzong was built in the 16th century on the foundation of a monastery built by Guru Rinpoche (who is regarded as the "second Buddha.") .From the dzong, walk further down to Nyamai Zampa, an oldest traditional cantilever bridge in Bhutan.
• In the evening stroll through the Paro town and visit local handicraft stores.
Overnight at hotel in Paro.

Day 5A Day Hike to Paro Taktsang Goempa ( Tiger's Nest Monastery)After breakfast, hike up to Taktsang Monastery, also known as ‘Tiger’s Nest’. The climb up to the viewpoint will take around 1 ½ hours and from there you will enjoy a spectacular view of the monastery clinging to the side of the cliff. Stop for refreshment at the View Point Cafeteria.Then walk further up to the monastery which will take about 1 hour. It is said that in the 8th century Guru Rinpoche flew on the back of a tigress from eastern Bhutan to this place and meditated in a cave here for 3 months. The principal Lhakhang (monastery) of the present monastic complex dates from 1692. Taktsang was damaged severely by fire in 1998 but has now been fully restored to its former beauty.After visiting the monastery, walk back down to the road on the way stop for lunch at the view point cafeteria and then walk further down to the road point. Then drive back to hotel. On the way visit Kichu temple, one of the 108 temples built in the 7th century by the Tibetan King Songsten Gampo. The story goes that a giant demon lay across the whole area of Tibet and the Himalayas and was preventing the spread of Buddhism. To overcome her, King Songtsen Gampo decided to build 108 temples, which would be placed on all the points of her body. Of these 108 temples, 12 were built in accordance with precise plans. Thus, it happened that in about the year AD 638 the temple of Jokhang in Lhasa was built over the very heart of the demon.
In the evening relax and overnight at hotel in Paro.

Day 6Departure from ParoIn the morning,your Bhutan tour guide from Access Bhutan Tours ( Bhutan travel agent) will see you off at the Paro airport for your onward flight.