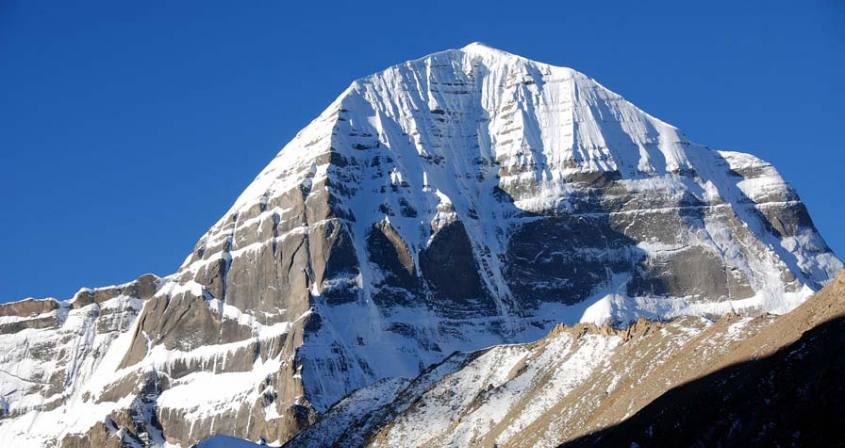 Mount Kailash, is mother of four of the great rivers of Asia, and sacred to those of Hindu, Buddhist, Jain and Bon faith, all of whom you might find on the 3-4 day pilgrim’s kora — circumambulation of a sacred site — around the base of the mountain. You need to commit significant time and resources for the journey to what Tibetans call Kang Rinpoche — Precious Jewel of Snow — usually from 15 to 23 days for an overland trip out of Lhasa. And you’ll need to be in good shape for the kora — a 32 mile (52 km) trek that starts at 15,000ft (4600m) and includes an 18,372ft/ 5600m


Day 2Jokhang TempleBuilt in the 7th century, Jokhang Temple is located on Barkhor Square, Lhasa. It is the supreme temple of Tibetan Buddhism, and is considered as the most sacred and important temple by Tibetans. Jokhang Temple is a must for Lhasa tour.
It was built by King Songtsan Gampo for his two brides: the Tang Princess Wencheng and Nepalese Princess Bhrikuti. The temple's architectural style combines Chinese Tang Dynasty design with Indian vihara design and Nepalese design.
Both princesses brought statues of Sakyamuni from China and Nepal respectively, and the two statues were housed in Jokhang Temple. At present the statue Princess Wencheng brought is still housed in the temple, but the statue Princess Bhrikuti brought is housed in Ramoche Temple.


Day 3NamtsoNamtso is considered as one of the most beautiful places in Tibet. Located in Damxung County and Baingo County, Tibet Autonomous Region, Lake Namtso is the second largest salt water lake in China. Namtso means ‘Heaven Lake’ in Tibetan. Namtso is at an altitude of about 4,718 meters (15,479 feet) — truly a lake in the sky.
Namtso is regarded as a holy lake by Tibetan Buddhists. During the Year of the Sheep in the Tibetan calendar believers make a pilgrimage to Lake Namtso. There are four temples around the lake. Quiet and large Lake Namtso, next to the blue sky, with white cloud surrounding the giant snow mountains, will purge your soul whether you are a Buddhist believer or not.


Day 4Yamdrok LakeYamdrok Lake (Yamdrok Yumtso) is one of the three holy lakes in Tibet. Located in Nagarzê County, Shannan Prefecture, Yamdrok Lake is about 70 kilometers from Lhasa.
Yamdrok Lake means ‘jade lake’ in Tibetan. It is a barrier lake, since glacial mud-rock flows blocked the river way millions of years ago. Yamdrok Lake, with a surface area of 638 km2 is about 70 times the size of West Lake in Hangzhou. It is a coral-colored lake and it is also called coral lake.
The famous Samding Monastery, the only Tibetan monastery which is headed by a female tulku is on the southwest coast of the lake. The unique natural scenery of Yamdrok Lake, combining lakes, islands, pasture, wild animals and plants, the monastery, snowy mountains, and blue sky, is incredibly attractive.


Day 7Barkhor StreetLocated in the old town of Lhasa City, Barkhor Street is a famous circumambulation and commercial center, and mostly retains the traditional features of the ancient city and its living mode.
It was the designated circumambulation around the Jokhang Temple, but now it is extended to include large pieces of the old quarter around the Jokhang Temple. There is a huge censer in the center of the street diffusing burning incense day and night.
There are more than 120 handicraft shops and 200 stalls on the street with 8,000 kinds of goods, including religious articles such as copper Buddhas, prayer wheels, scriptures, and prayer beads, and Tibetan handicrafts such as Tibetan wool, snuff bottles, and Tibetan knives. Goods from India, Nepal, Burma, and Kashmir are also sold.


Day 8NorbulingkaNorbulingka is located in the west of Lhasa, a short distance to the southwest of the Potala Palace. Norbulingka means ‘Jeweled Park’ in Tibetan.
Built in 1755, Norbulingka was the summer palace of the Dalai Lamas. Dalai Lamas would move there from the Potala Palace in summer.
Norbulingka cover an area of 36 hectares (89 acres) with 374 rooms. It is the largest garden, with the best scenery and the most historical sites, in Tibet. It has been turned into a park. Norbulingka is an important place to celebrate the Shoton Festival, a traditional Tibetan festival. Norbulingka is free of charge at Shoton Festival, and there are various activities are held there including Tibetan drama performances.


Day 10Lulang ForestLulang means ‘dragon king valley’ in Tibetan. Lulang Forest is about 88 km from Bayi town in Nyingchi Prefecture, and National Road 318 runs though the forest. It is quite convenient to get there.
Lulang Forest is a typical plateau forest on mountain slopes. The mountains are covered from low to high with bushes, dragon spruce, and pine trees, composing the forest.
There is a cultivated meadow area in the middle of the forest. Rivulets wind through the meadow and some villages are scattered there. The cloud and mist gather and scatter among the mountains, forest, and villages composing beautiful scenery.
There are many other attractive places in Tibet that are worthy of visiting, such as Drepung Monastery, Samye Monastery, Sakya Monastery, Basum Lake, Manasarovar Lake, Tibet Museum, and Segrila Mountain.
Tibet holds the imagination of Shangri-la to many westerns for centuries. The place attracts millions of travelers each year to admire its surreal natural beauty and old religious culture. Below are ten most places you should not miss when you traveling in Tibet.