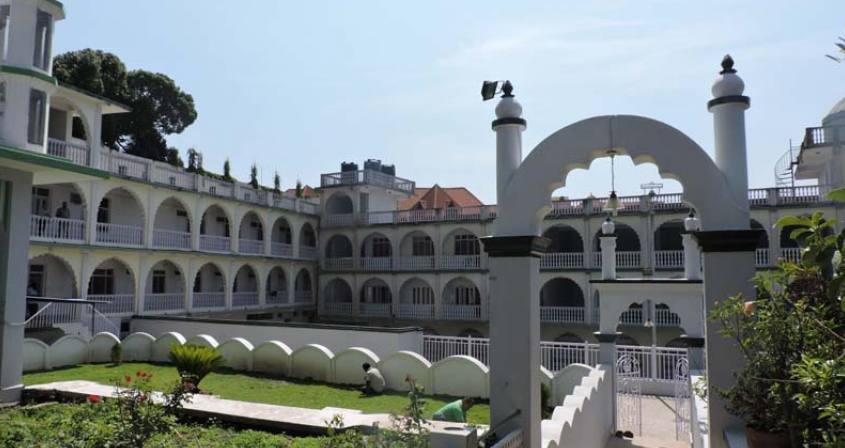 Mushlim Pilgrimage Tour in Nepal with Pink Mountain Treks and Expedition will provide a chance to enlarge your pilgrimage heart and knowledge about Nepali Mushlim's History, Cultur, Tradition and Lifestyle, which have a massive different then the other part of world.

Historical records suggest that Muslims have inhabited Nepal for last 600 years although many people believe Muslims came here much earlier. Kashmiri Jame Masjid, situated on the king's way only a few hundred meters form the king's palace, stands testimony to these early arrivals. Later, another grand mosque came into existence on the same road a few hundred meters south of the first - the Nepali Jame Masjid. During the reign of King Ratna Malla in 15th century A. D. Muslims entered into the Kingdom as traders. King of Chaubise in western Hill invited Muslim fire experts to train their soldiers in 17th and 18th centuries.

For decades Muslim traders from Kashmir and beyond have used the Nepalese route for business with Tibet. Many are believed to have married and settled in Nepal. A big influx of Muslims from India took place in 1857 when the then British government crushed the largely Muslim led rebellion against their rule in India. Scores of people fled the country and came to hide in the remote mountains and hills of Nepal. Many of them never returned to their homeland.

Nepal, particularly Kathmandu, saw arrival of another group of Muslims more recently in the 1950's. The Chinese occupation of Tibet was heavy and cruel on religious communities, Buddhists and Muslims, alike. They had to abandon their homes and settle in India as refugees. Some of them finally came to live in Nepal.

A good number of Muslims have always been present in the southern plains; even before these areas were formally annexed to Nepal by King Prithivi Narayan Shah and other kings of the country. With the annexation, the land as well as its inhabitants, including Muslims, became part of Nepal as a natural process.

Nepal has an open border with India. Passports and visas are not required for the nationals of one country to travel to another. With some restrictions and reservations, they can live and work in each other's country. Hence, there is always a back-and-forth migration of people across the border. Along with others, Muslims have always come from India to settle in the bordering districts of Nepal. That explains the overwhelming concentration of Muslims in the southern plains of the country called Terai.

Nepal is divided into 75 administrative units called 'districts'. According to the 2001 census each and every district of the country has Muslim presence. Of them Humla district in the Mid-western Development Region has only 1 Muslim whereas Rautahat in the Central Development Region has 1,06,111 (19% of the total population of the district). The Muslim population of Kathmandu (the capital) district is 11,982 (1%).

Nepal is a very poor country. The per capita income is only 240 US dollars. Forty-two per cent people live below poverty line. The Nepalese government does not maintain socioeconomic data on the basis of religion. But it can be safely assumed that Muslims fall in the lower rungs of socioeconomic

Nepal is basically an agriculture country. The majority of Muslims are employed in this occupation. Only a small minority has land of their own enough to feed self and family. The remainder is landless laborer. Besides agriculture some educated Muslims are employed in service sector, both government and private. But there is no reliable data on it. Tibetan and Kashmiri Muslims are engaged in business. Economically Katmandu Muslims are better off than the Muslims in the Terai who are mostly farmers. The hilly Muslims are generally bangle sellers and also have very small agricultural land. Some also work as tailors, rickshaw pullers etc. and their life is very hard. The community owns no top business house. Many Muslims, as their non-Muslim countrymen, migrate to India, the Gulf countries and Malaysia for employment.

Nepalese Muslims are lagging behind in the field of education because of poverty and lack of social organization. Although there are primary schools called maktabs in many Muslim villages and communities, they are being run very inefficiently. None of them has strong financial support. Local donations are very difficult to come by because people are poor themselves. Students have to sit on the floor. The buildings leak in rainy season. There is lack of qualified and trained staff. They are paid paltry sum as salary. They leave whenever a better job is offered.

Few villages and communities have higher schools of learning. Many have a curriculum solely based on traditional Islamic subjects ignoring the national course of study. Only a minority has combined both. A few of the latter group, has bee recognized by the government so that the students after graduating from the school can appear in the board level examination held by the government.

There are only a handful of big Madrasas (High School of Islamic teachings) in the country. Their problems are same as cited in the first paragraph of this section. In the last few years they have started sending representatives to some Gulf and other Muslim countries to collect donations. They have met with only partial success. For lack of higher institutions of Islamic learning inside the country, most students go to India to get Islamic education. Some of them also travel to Saudi Arabia and Egypt for the purpose.

More recently, Nepalese Muslims in general and Islamic institutions in particular, have started facing a new problem. After 9/11 the madrasas are looked upon with suspicion. They are suspected to harbor terrorism despite vehement denial by the concerned management bodies. The courses of study are being scrutinized. They are pressurized to dilute their Islamic content and add more secular subjects. These institutions feel threatened.

The number of Muslim students in secular government and private schools and colleges is negligible. They cannot afford the expensive education in private institutions. Government schools are few and far in between. Their absence is particularly noticeable in Muslim localities. If the number of Muslim students is few in schools it is even fewer in colleges and universities. Their number is virtually nil in professional courses like Medicine and Engineering. Financial burden once again is the main cause. Secondly, they are less able than others to successfully face the highly competitive admission tests. This is reflected in the small number of Muslim professionals in the country. For example, there are fewer than 200 Muslim doctors, only a handful of them holding postgraduate degree.

More recently, some Muslim organizations have come forward to address this issue. Al-Hira Educational Society is establishing and running a dozen schools, some of them English medium with government and Islamic curriculum woven together. Students' Education Foundation, in collaboration with the Islamic Development Bank of Jeddah, provides scholarships to students in Medicine, Engineering, Forestry and Agriculture etc. With their combined efforts, signs of positive change have started appearing.

Day 09:Drive to Saptari. Visit to Mushlim School and village.

Day 12:Fly or drive back to kathmandu.

Day 13:Fly out.Pink Mountain Treks and Expedition's representative will drop you at airport before Three hours of your flight schedule.

Day 9Drive to Saptari. Visit to Mushlim School and village.

Day 12Fly or drive back to kathmandu.

Day 13Fly out.Pink Mountain Treks and Expedition's representative will drop you at airport before Three hours of your flight schedule.