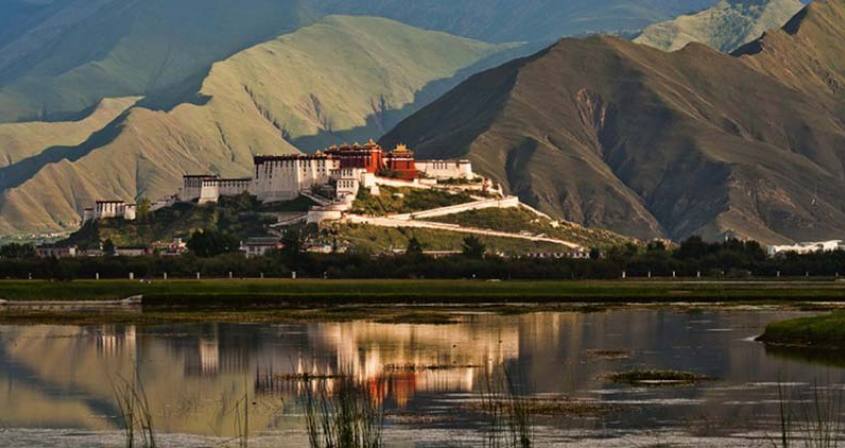 Tibet is known as roof of the world. The trip trail to Tibet with Pink Mountain Treks and Expedition is the classic route across the mystery land. The ancient silk trade centre was Tibet and most of the Cultural, art, Buddhist Philosophy, Artistic monasteries, hidden valley and centuries-old caravan trails was developed from this high himalayan part. Tibet, the very name evokes feelings of awe and mystery.

Tibet offers totally different offer then the rest of the world have. These days Tibet did a rapid and unimaginable development within a few year. Preserving the old palace, monasteries, temple, art, hidden valley, books, library, totally different culture and still spend their enough knowledge and resources to build and develop the Tibet difference then the rest of the world.

Tibet 's total area is 471,700 sq mile.Ethnic Tibetans, Menba, Lhoba, Mongols, Hui and a growing numbers of Han Chinese are the main groups who live inb Tibet with 3.50 total population. People speak Tibetan and Chinese languages who follow and respect on Buddhism and Animism. Fifty Five percent of the total land of Tibet is covered by grassland and rest of the land is covered by human civilization.

Tibetan New Year, Shoton Festival, Bathing festival are the main festivals of Tibet. Minus 10 Degree to 28 Degree is the basic temperature of Tibet.

The top places to visit in Tibet are actually some of the top places to visit in the world. Nowhere on earth can you find such an intoxicating blend of humming spirituality, art and raw natural beauty as in the high-altitude holy sites of Tibet. And, basically, every destination is a holy site, every path a pilgrimage, whether you are trekking to Mount Everest — the “Holy Mother” — or circling the spectacular chapels of the Jokhang in the center of Lhasa city. Despite the wide-spread physical destruction of the Cultural Revolution, and the heavy ongoing Sinicization, Tibet has managed to preserve the heart of some of her most glorious cultural jewels. The list below cannot pretend to be definitive, but if you’ve never been to Tibet, here’s a great start for places to visit from a base in Lhasa.

Jokhan in Lhasa TibetIf you see nothing else in Lhasa, visit the Jokhang Temple, the spiritual heart of Tibet. Built during the reign of King Songsten Gampo in the mid 7th century, and the scene of countless important events in Tibetan history, the Jokhang is surrounded by the Barkhor Square and prayer path, a circuit around the Jokhang that is constantly teeming with Tibetans and foreigners from all walks of life. You’ll find Tibetans prostrating at the temple entrance, and crowding the intensely beautiful chapels, all alive with the hum of prayers, clouds of incense and fantastic Buddhist paintings and statuary, including the Jowo Rinpoche, the most precious statue in Tibet, beautifully depicting the Buddha Shakyamuni at age 12.

Potala Palace in TibetBegun by the great fifth Dalai Lama and the winter home of all the Dalai Lama’s until the current 14th Dalai Lama fled Tibet in 1959, the Potala Palace is an architectural marvel, rising out of the center of Lhasa. But unlike the Jokhang, humming with prayers and life, the Potala is a dead shell of its former self, and can be a bit depressing to visit. It is literally now a museum instead of a living monastery and seat of government. While there is still a lot to see as you climb its thirteen stories (not recommended on your first day at altitude), it is absence that leaves the greatest impression — the absence of His Holiness the Dalai Lama, his monastery and Sho — the village at the foot of the hill. Still, it’s very worth a visit, and you if have some time in Lhasa, you will likely find yourself hanging out a bit, with a bunch of other Lhasa locals, on the Potang Shakor, the prayer circuit around the grounds of the Potala.

Nam-tso LakeOn a clear day, the beauty of the turquoise, salt waters of Namtso at the foot of the snow-peaked Nyenchen Tanglha range would take your breath away even if you weren’t at over 15,400 feet (4718 meters) when you arrive. You can get here in a long day trip from Lhasa, and take in the wide-open vista of water, sky and mountains with walks along the shore of the sacred lake. “Tso” means lake in Tibetan, so strictly speaking it’s repetitive to call it Nam-tso Lake. It’s not the greatest place to stay overnight, with really basic accommodation and an altitude high enough to feel the difference from Lhasa but if you do stay, you might be rewarded as we were with a gorgeous sunrise in crystalline high-mountain air.

Draksum-tsoA beautiful highland lake in Kongpo, the green waters of Draksum-tso are encircled by even higher peaks rising like walls out of the water. The lake is noted for the tiny, picturesque island at it’s center which is the home of several Nyingma nuns and their 14th century monastery, known as Tsodzong. The lake also has important spiritual and historical connections, both to Padmasambhava (Guru Rinpoche) and King Gesar. It takes about 7 hours from Lhasa to get there.

Drepung MonasteryDrepung Monastery, founded in the 15th century, was for centuries one of the greatest monasteries of the world, home to several Dalai Lamas before the Great Fifth built the Potala, and housing up to 10,000 monks. Scattered over a hillside 8km outside of Lhasa, Drepung was perhaps the least damaged of Lhasa’s great monasteries by the Cultural Revolution, with many intact chapels and halls, though if you walk the kora around the perimeter, you will find large ruins partially hidden by the hillside vegetation. Though a shadow of its former self, with only something like 500 tightly controlled monks in residence, Drepung still manages to retain some of its feeling of a living spiritual center. It is fascinating to wander the narrow lanes between the buildings, into chapels full of precious statuary, like the precious three-story high statue of Jampa, the future Buddha, portrayed at age 12.

Samye MonasteryGetting to Samye, the first Buddhist monastery in Tibet, is a small adventure in itself. You can drive from Lhasa to the ferry crossing of the huge Tsangpo River, then catch an open-air truck for the bumpy ride to Samye. Or you can make the popular trek, taking in some spectacular views, from Ganden Monastery. Originally built in the 8th century, Samye is in a peaceful, pretty valley, its outer walls connecting to a village and barley fields that were beautiful to walk through at sunset. The entire monastery itself fascinatingly represents, like a mandala, the Tibetan Buddhist cosmos, with structures representing continents, the sun, moon and oceans around the central main temple, representing Mt. Meru, the legendary mountain at the center of the Buddhist world. And despite 1200 years of damage and restoration, Samye still holds an ancient and peaceful but living monastic presence in its mountain valley.

Sekhar-Guthok-Milarepas-TowerUsually a three-day round trip from Lhasa, near the Bhutanese border, Lhodrak district is the home of Milarepa’s Tower. (You can stop the first night in Nagartse on the quite beautiful drive, which goes by Sabolung Monastery and Yamdroktso lake.) Suggested by its name (“guthok”) to be nine stories, the unusual seven-story tower was built, according to Tibetan legend, by Marpa’s celebrated disciple Milarepa. Marpa put Milarepa through a hellish series of tests and humiliations to purify the disciple’s bad karma, including forcing him to build and rebuild various towers until accepting this, his fourth effort. The site, associated with the Kagyul School of Tibetan Buddhism, has a number of fine examples of wall-paintings from the 12th and 13th centuries, and may have the earliest image of Milarepa.

Sakya MonasteryHuge and foreboding, Sakya Monastery’s fortress-like outer walls are painted, very unusually, gray with red and white vertical stripes, instead of the usual Tibetan whitewash. Until 1959 the home of His Holiness Sakya Trizin, head of the Sakya sect of Tibetan Buddhism, the monastery has two parts, split by the Trum-chu river. The older, northern side, in ruins on the hill, is good for hiking and views of the massive newer (13th c) buildings across the river. The southern buildings, which have been undergoing substantial renovations, contain thousands of sacred artworks, scriptures and artifacts, including a conch shell used to summon the Buddha Sakyamuni’s disciples to teachings. You can include a visit to Sakya on the way to Everest Base Camp from Lhasa, or take a bus 127km from Shigatse.

Day 10:Drive to Shegar via Sakya.

Day 10Drive to Shegar via Sakya.

Day 13Bhaktapur and Patan Tour After breakfast, proceed to sightseeing tour to heritage sites of Bhaktapur and Patan, the most medieval-look town in Kathmandu valley, and visit its Durbar Square.In the afternoon, free in Thamel, tourists favorite shopping area.

Day 14Fly OutYou will be transfer to airport by representative of Pink Mountain Treks and Expedition for your flight to your destination before three hour of your flight schedule.