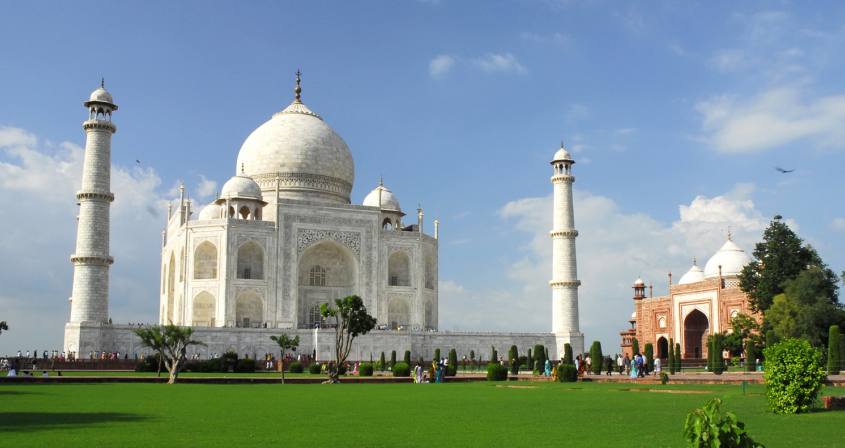 India's Golden Triangle comprises the three most visited cities in the country's north-west - Delhi, Agra and Jaipur, which are all connected to each other by good road and rail links. On the map, these form a roughly equilateral triangle, some 200-250km along each side. This triangle has been dubbed "golden" for the extraordinary wealth of cultural and historical splendour on offer in each of the three cities.

Jaipur, capital of the largely desert state of Rajasthan, is home to some of Asia's best bazaars. You could spend weeks in Delhi, the sprawling, fascinating Indian capital, and not see it all, while Agra, once the heart of the Moghul empire, boasts the unparalleled beauty of the Taj Mahal, which adorns the banks of the Yamuna river. The Golden Triangle is a classic introduction to India: if you've never been to the subcontinent before, start here. Which usually involves a flight into Delhi.

Delhi, being such a large (population around 14 million) and diverse city, absorbs its tourists with ease. Agra and Jaipur both have sizeable numbers of Western tourists roaming around. Jaipur, as capital of Rajasthan, has a role as a commercial and administrative centre that has nothing to do with tourism, and a population of 2.5m. The city's alluringly frenetic old quarter is known as the Pink City after its red-washed buildings, packed with stalls selling everything from silk to milk. Of Jaipur's numerous monuments, the Hawa Mahal - an ornate five-storey façade, designed to allow the women of the royal household to observe the street in anonymity - has become an icon of Rajasthani architecture.

Completing the triangle, Agra - for all its monumental splendour - can be a trial, with the perpetual smog and the hard-sell hawking. It can at times feel like a swollen village: its parks and public spaces have an oddly suburban ambience. Yet it boasts a stupendous Moghul fort in the city centre and the ethereally beautiful Taj Mahal.

The marble mausoleum is by far the most popular tourist site in India - and despite the hype and the cliché it is an astounding and mesmerising building. In addition, Agra offers other jewelled tombs and architectural marvels as well as a medieval-like maze of ancient bazaars, a mass of hooting, tooting traffic and some of the most rapacious shopkeepers in the country. Motorised traffic is banned from the complex surrounding the Taj Mahal.

Day 1Arrive Delhi and Delhi Sightseeing On arrival at Delhi airport Pink Mountain treks and Expedition's representative will meet you to pick you up and transfer to hotel. later go for City Tour of Delhi- the Raj Ghat, Red fort & Jama Masjid are important places to visit, you may also visit Chandni Chowk, spice market etc. Later on proceed to visit the New Delhi. The Qutub Minar, tallest stone tower in India, imposing India Gate and the Rastrapathi Bhawan, Laxmi Narayan Temple, Lotus Temple and, newly built Akshardham temple are of much significance. By evening return to your hotel for overnight stay

Day 2Delhi - Agra After breakfast, depart for Agra by road (220 kms / 04 hrs). On your arrival in Agra check-into the hotel of your choice. Afternoon sightseeing tour of Agra city visiting Taj Mahal and the Red Fort. The visit to the Taj Mahal will long be remembered by you as the highlight of your Forts and Palaces of Rajasthan tour. Overnight in Agra.

Day 3Agra - Jaipur ( By Surface 260 kms/ Approx 5 hrs) After breakfast drive to jaipur - the fabled “pink city” of the desert named after jai singh, the former maharaja of jaipur. This is the only city in the world symbolizing the nine divisions of the universe through the nine rectangular sectors subdividing it. The palaces and forts of the yesteryears, which were witnesses to the royal processions and splendours are now living monuments enroute visiting fatehpur sikri- a perfectly preserved red sandstone “ghost town” which was the estranged capital of mughal emperor akbar, built in 1569 and deserted when its water supply failed. Arrive jaipur in late evening & transfer to hotel. Night stay in jaipur.

Day 4Jaipur This morning after breakfast visit the Amber fort, built in 16th century, enjoy an elephant ride at Amber. Drive past the Hawa Mahal-a Palace of winds. In the afternoon you will visit the city palace and museum, walk to adjacent Jantar Mantar an astronomical observatory. Rest of the evening is at leisure. Stay overnight at hotel in Jaipur.

Day 5Jaipur - Delhi Today you will be transferred back to Delhi airport/railway station for your onward journey.