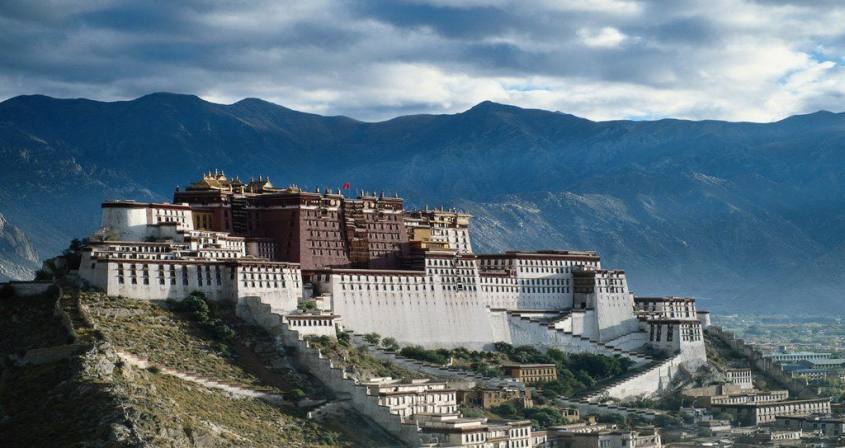 Nepal Tibet Bhutan Tour with Pink Mountain Treks and Expedition introduces  Himalayas culture, religion and nature in one single trip, the breathtaking flight over the Himalayas including Mt. Everest whisks you to the incomparable Himalayan countries.

In Lhasa, Tibet’s long-forbidden capital city at 12,000 feet, you will tour the major monuments, including the legendary gold-roofed, thousand-room Potala Palace. Then walk pilgrim trails, hike up to ancient ridge-top monasteries, meet a colorful array of people, from nomads to lamas, and relish in some of the most majestic mountain scenery on earth! Come take a step back in time and join us on this enriching, non-trekking journey for an eye-opening look into traditions and cultures far removed from those in the West.

Another spectacular flight brings you to the tiny Himalayan Kingdom of Bhutan where you will feel time has moved back. Explore the pastoral back roads of Bhutan, a true bastion of tradition in an uncertain world, where you find an independent people who have not rejected their ancient spiritual heritage for modern ways. You’ll visit the Shangri-La setting of the Paro Valley, the central Bhutanese town of Punakha, with its huge, spectacular monastery set by the river, and the capital city of Thimphu.

During Nepal Tibet Bhutan tour, Pink Mountain Treks and Expedition use expert local guides, private vehicles and convenient and authentic hotels. we try our best to make your visit as comfortable as possible. local ceremonies are happening everywhere, if you are interested please feel free to ask our guides and drivers to takes there. if you want to travel during the festival season, please ask us now, we provide you the list of festivals, our festivals are based on lunar calendar.

Nepal Tibet Bhutan tour is the cultural tours of Himalayas which includes highlights of Kathmandu, Lhasa and Paro; Nepal, Tibet and Bhutan respectively. You will be exploring the history, culture, religion as well as art and crafts of these three Himalayan countries.

Day 07:Fly back to Kathmandu

Day 08:Fly to Bhutan and drive to Thimpu

Day 10:Thimphu to Punakha excursion- back to Thimpu (150 kilometers.)

Day 2Kathmandu (1350m) sightseeing tour.Your Tibet visa will be processed today.
After breakfast, proceed to sightseeing tour to heritage sites of Kathmandu. Visit to Boudhanath stupa, Pashupatinath temple, Swayambhunath Stupa and Kathmandu durbar square tour. Pashupatinath temple-the holistic Hindu temple, Boudhanath Stupa – one of the giant stupas in the world. Today you will visit the traditional painting school where you will know the underlying meaning of Nepalese dying art. Overnight in Kathmandu


Day 3Flight to Tibet LhasaOn arrival in Lhasa Gongar airport, Pink Mountain Treks and Expedition's Tibetan guide will welcome and take you to the hotel.
Walk around Lhasa, highland city with the altitude of 3,550 meters (12000 ft.), located on the foot of Mount Gephel. Lhasa is the administrative capital of Tibetan plateau. This ancient city is popular for Dalai Lama’s Potala palace. In early 7th century the famous king Srongtsen Gompo unified many tribes. After unification he changed the capital from Yarlung to Lhasa and constructed Potala Palace. We get chance visit century-old Buddhist monasteries, palaces and busy Barkhor Street, the famous local market area. There are around 3,00,000 people living in Lhasa area.
Lhasa means PLACE OF GODS. So here major religion is Tibetan Buddhism. Locals call it by another name SUNLIT CITY. However, mostly cold wind rules the city so bring your warm clothes. Here, annual average temperature is 7 degree Celsius. Overnight in Lhasa


Day 4Lhasa Exploration dayExplore Potala palace, Sera Monastery and Jokhang Temple
Legendary Potala Palace is located at the top of red hill with the best view of Lhasa city. Potala has two parts: the first part is white palace second being the Red. It was built for meditation in 7th century by king Srongtsen Gompo. Later, the 5th Dalai lama renovated it in the present form by completing the white and red wing in 1694. Now Pothala palace is UNESCO world heritage site and open to visitors. We can visit different chapels, gallery, Tomb of Dalai Lamas and official chapel of 14th Dalai Lama till 1959.
Sera monastery is a famous religious historic site. Built in 1419 by a student of Tsongkhapa, this is one of the three largest monasteries in Lhasa other being Ganden and Drepung. It is a major center for Gelukpa sect of Buddhism. Sera monastery is 2 miles far from the center of Lhasa. Due to the cultural revolution of 1959, this monastery was damaged and many monks were killed. Now it is rebuilt and opened for the visitors.
The Heart of Lhasa is Jokhang Temple – the spiritual center. It was constructed by king Srongtsen Gompo, queen Bhrikuti and Wencheng. This mysterious temple is located in Barkhor square and now is a UNESCO world heritage site. This monastery has fusion of Nepalese and Tibetan art cum architecture on wood and metal. Overnight in Lhasa potala palace, lhasa tour


Day 5Explore more areas in LhasaVisit Drepung monastery, Mentshikang (Tibetan medicine center) and Norbulingka palace.
The biggest monastery in Tibet, Drepung monastery, lies 6 km west of Lhasa. The construction of this Gelukpa center was started in 1415. In this shelter of thousands of monks, you will visit the prayers hall, meeting hall, kitchen for 7 thousands monks and more chapels.
Tibetan medicine centre (Mentsikhang institute) was built in 1916 but medicine history goes back to 3rd century BC. It is a Tibetan traditional health treatment centre and also the centre for research on orthopedics, surgery, pediatrics and internal medicines.
Dalai Lama’s summer camp is Norbulinka Palace which was constructed in 1755 with a huge park around. There are prayers hall, nice painting and art works inside palace. This UNESCO site is located nearby Potala palace, west of Lhasa city. Overnight in Lhasa


Day 6Optional Excursion to Yamdok-Tsho Lake outside LhasaAfter early breakfast drive to Yamdoktsho Lake. Get pleasure of the view and drive back to Lhasa in the evening.
Yamdrok-Tsho Lake is one the holiest lakes in Tibet. It lies on the friendship highway to Kathmandu, while the road goes up to Kamba la pass (4800 meters). We will enjoy the view from the pass, great scenery of turquoise-blue lake. Overnight in Lhasa


Day 7Fly back to KathmanduTake panoramic-Himalayan flight to Kathmandu, Nepal. After the immigration formalities, meet with representative of Pink Mountain Treks and Expedition then transfer to the hotel. In the afternoon, visit UNESCO-enlisted monuments of Kathmandu valley. Overnight in Kathmandu

Day 8Fly to Bhutan and drive to Thimpu Transfer to Kathmandu international airport for 1:15 minutes flight to Paro airport, Thimpu. Pink Mountain Treks and Expeditions Bhutanese guide will welcome you and transfer to the hotel. Depending on the arrival time, we can do some guided tour today or have rest and start tomorrow early in the morning. Overnight in Thimpu

Day 10Thimphu to Punakha excursion- back to Thimpu (150 kilometers.)Punakha jong, bhutan tour afrer early morning breakfast, drive to famous Dochula Pass (3102 meters) where we get opportunity to enjoy the view of Himalayan range. Walk around 108 stupas and take some time for awesome pictures. Drive to Punakha Zong and if time permits, visit fertility temple through rice field terraces. Return to Thimpu for overnight stay.

Day 11Thimphu to ParoAfter breakfast, drive back to Paro and Hike to Taktshang known as Tiger’s Nest.
Taktsang Monastery aka Tiger’s Nest (Tiger Lair) is the holiest monument for Mahayana Buddhists. It lies in the steep hill side in the valley of Paro. It was originally constructed in 1692 around the Taktsang cave where Guru Padmasambhava is beleived to have meditated for three years, three months, three weeks, three days and three hours in the 8th century. Guru Padmasambhava is credited with introducing Buddhism to Bhutan and Tibet. Overnight in Paro


Day 12Paro/Kathmandu/ChitwanTransfer to airport for your fly to next destination or fly back to Kathmandu. Uppon arrival at Kathmandu meet by us and drive to Chitwan National Park (190 kms - 5 hrs drive).