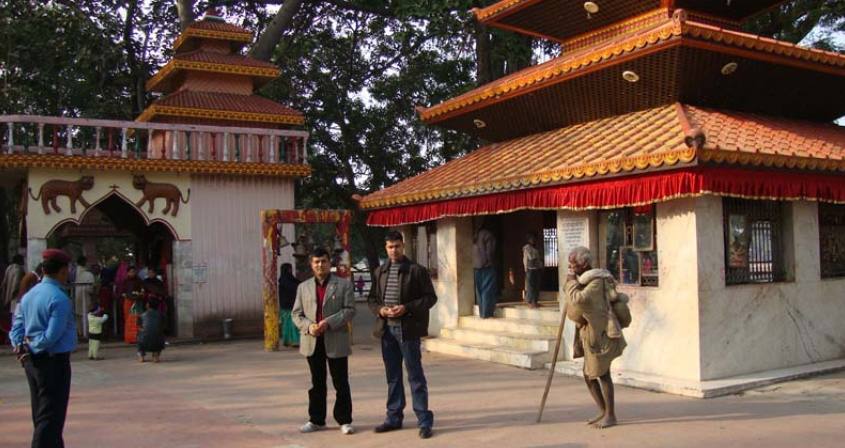 Simraungadh lies in Bara District in the Narayani Zone of Nepal. Its ancient name was Simara-vanagadha . At that time all the big settlement areas used to be called as Fortress in terms of security. Such fortresses were made even in the midst of the forest and were called as ‘Vanagadha’ or ‘Vanadurga’.The fortress used to be named after the forest’s name. Thus, Simara-Vangadha got it’s named from the forest of Simara. In a course of time, the term was pronounced as “Simraungadh”.which is the current place’s official name in Bara district. The entire area around of then Simraungadh was famous by the name Tirhut. However, the immediate evidence found in Kathmandu Valley suggests this area be referred as Doya rajya. It is believed that the Karnataka state (dynasty) including Southern and Eastern Terai) was established at the same period when Khas Kingdom in the West wasestablished. Its capital was in Simraungadh (Simara-vanagadha) or today’s Simara. In 1154 BS (or 1097 BC), Karnataka state was established in Tirhut by Nanya deva. The independent state existed for almost 229 years and in 1326 BC, it was dissolve. Nanya Deva and Hari Singh Deva were the main lords of this Kingdom. Nyayadeva, a resident of southern India’s Karnataka region were. Nyayadeva was a resident of southern India’s Karnataka region. He was the captain of the Chalukya rulers in southern India. Nyayadeva came here when Chalukya was campaigning victory towards North India. It is said that later he established a kingdom in these regions making Simraungadh as center/capital. After Nyayadeva, the lords like Ganga Deva, Nara Sigh Deva, Rama Singh Deva, Sakti Singh Deva, Bhupal Singh Deva and Hari Singh Deva, etc ruled over Simraungadh respectifully. Hari Singh Deva was the last ruler of Karnataka dynasty. During the reign of Hari Singh Deva (in 138 BS), Ghiyasuddin Tuglaka ( Muslim king of Delhi) attacked and destroyed the Karnataka State.

In fact, Taleju Bhavani  worshiped as the family deity by Malla Kings of Kathmandu Valley is also the same family deity worshipped by Kings of Karnataka. Deval Devi, the queen of Hari Singh Deva while entering into Kathmandu Valley as a refugee also brought the a vase of Taleju Bhavani with her. The influence of Karnataka on the Valley increased after Deval Devi and his son Jagat Singh entered to the valley which was natural too. After the death of Hari Singh, the joint rule of Rudra Malla and Ari Malla kept going on. However, Ari Malla was just a name of ruler by name. Rudra Malla, after the death of Hari Singh Deva, gave refugee to the queen Deval Devi and her son Jagat Singh in his own palace. Deval Devi set/established the vase of Taleju Bhavani in the court/palace. After then, the later rulers of Nepal also became worshipers of Taleju Bhavani. Devaladevi’s son prince Jagat Singh got married to Malla princess Nayak Devi and the couple gave birth to Rajalla Devi.She was the one who was married to King Jayasthiti Malla. He was a 14th-century king of Nepal belonging to the Malla dynasty.

Bariyar Village of Bara district is famous for religious destination. In every decade  timeline hundred thousands of religious fellow gathered in Bariyarpur to celebrate Gadhmai Festival.

Day 03:Fly or drive to Simara the transfer to Kalaiya.

Day 08:Fly or drive back to Kathmandu.

Day 3Fly or drive to Simara the transfer to Kalaiya.

Day 8Fly or drive back to Kathmandu.

Day 9Fly OutYou will be transfer to airport by representative of Pink Mountain Treks and Expedition for your flight to your destination before three hour of your flight schedule.